When will astronauts go to Mars 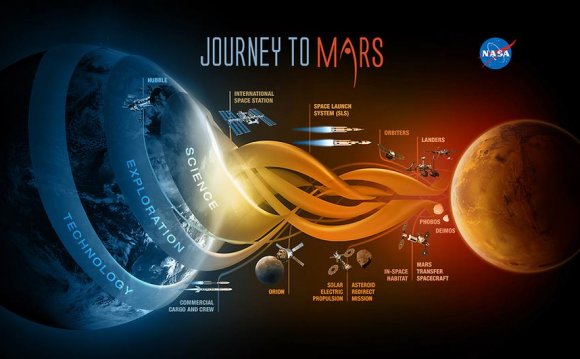 NASA’s Orion spacecraft will launch Thursday morning, performing an unmanned test flight for the machinery that will eventually bring humans to asteroids, before ultimately transporting them to Mars. While “eventually” has always been sort of a given, NASA has finally announced projected dates.

During a press conference today on NASA TV, it was announced that Orion will bring four astronauts at a time to asteroids between Earth and Mars by 2025, and the first humans will reach the red planet in the mid-2030s. This venture into deep space will be the farthest humans have gone since Apollo 17 went to the moon in 1972. (David Paliwoda and Jesse Williams have made a fantastic website that illustrates Earth’s relative distance from the Moon and from Mars. Spoiler: it’s a heck of a lot further than you’d think)

With the first goal date only about 10 years away, the importance of Thursday’s test flight has been heightened. The Orion spacecraft will be unmanned, but the cabin will be filled with 1, 200 sensors to collect information about radiation and heat, as well as testing different systems, including the launch abort system. At the time of this writing, the launch is still currently a ‘go’. Assuming no problems, Orion will launch on Thursday at 7:05 am EST from Kennedy Space Center. It will orbit the Earth at a distance 15 times greater than that of the International Space Station, and deploy 11 parachutes upon reentry, splashing down in the Pacific Ocean right around 11:30 am EST.

Following the announcement, Mark Geyer, Todd May, and Mike Bolger—program managers of the Orion spacecraft, Space Launch System, and Ground System Development, respectively— participated in an

Would You Go to Mars If You Could Never Come Back to Earth?

NASA tests engine that could launch astronauts to Mars