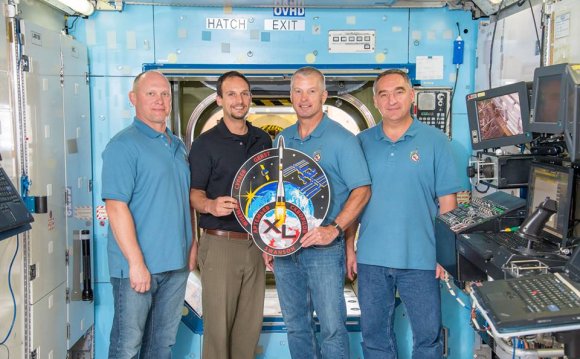 Laika, the first animal ever sent to space, rode to orbit in Sputnik II on the 3rd of November, 1957. Several countries issued stamps honoring Laika. The mock-up of her pressurized space cabin is shown on the right.

The first 'American' in space: Ham

Ham the chimpanzee was sent into space onboard a Project Mercury capsule in January 1961, and had to perform several tasks in response to flashing lights in exactly the way that he had been trained on Earth. His responses were only fractionally slower, showing that tasks could be carried out in space.

On April 12, 1961 Yuri Gagarin, pictured left, became the first human to achieve spaceflight and orbit the Earth. His spacecraft, Vostok 1, circled Earth once in a flight that lasted 108 minutes. At the highest point, Gagarin was about 327 kilometers above Earth. He was born in Russia on March 9, 1934 and joined the Russian Air Force in 1955. Soon afterward, he became a military fighter pilot. In 1959, he was selected for cosmonaut training as part of the first group of USSR cosmonauts. Yuri Gagarin flew only one space mission.

On Jun 16, 1963 Valentina Tereshkova was launched into space aboard Vostok 6. She became the first woman to travel in space, making 48 orbits of Earth and spending almost three days in space. Valentina Tereshkova was born in Russia on March 6, 1937. Her interest in parachute jumping was one of the reasons she was picked for the cosmonaut programme.

The first space walk: A. A. Leonov (USSR)

The first person to walk on the Moon: Neil Armstrong (US)

Born on August 5, 1930, Neil Armstrong served as command pilot aboard Apollo 11 mission and became the first human to step on the lunar surface on July 20, 1969.

Born on May 30, 1963, Helen Sharman became the first British person in space when she flew aboard the Russian space craft Soyuz TM-12 on May 18, 1991. Sharman joined the orbital space station, MIR, and conducted space experiments with MIR resident crew members.

Britain does not currently subscribe to any human spaceflight programme, so Helen Sharman is still the only British citizen to have flown into space as NASA does not allow UK citizens to fly onboard shuttles as they have no funding. However, by having duel citizenship or changing to Amercian citizenship, people born in Britain have succeeded in becoming NASA astronauts. Two of these are Dr Michael Foale and Dr Piers Sellers. Foale, left, joined the Space Shuttle programme, with his first flight on STS-45 in 1992, and he stayed on MIR in 1997. Sellers flew to the International Space Station onboard the shuttle Atlantis in 2002, and completed a spacewalk to secure a truss to the Station. Dr Foale has recently been in talks with English Prime Minister Tony Blair about the possibility of revising the governmental attitude to human space flight.

The first crew of the International Space Station (Expedition One)

William (Bill) Shepherd, 47, Capt., USN, served as the International Space Station Commander. Selected as an astronaut by NASA in 1984, Shepherd considers Babylon, N.Y., his hometown and this was his fourth space flight. Shepherd served as deputy manager for the International Space Station Program from 1993 to 1996, prior to his assignment to command the first flight crew. His Space Shuttle flights include mission STS-27 in December 1988; STS-41 in October 1990; and STS-52 in October 1992. He had logged more than 440 hours in space.

Yuri Pavlovich Gidzenko, 35, Lt. Col., Air Force Russia, served as the Soyuz Commander. Gidzenko began his training as a Russian cosmonaut in 1989. He was born in the village of Elanets, Elanetsky district, Nikolayev region, Russia, and this was his second space flight. Gidzenko commanded the Euromir-95 mission aboard the Mir Space Station from September 1995 to February 1996. He had logged more than 180 days in space.

Sergei Konstantinovich Krikalev, 38, served as the Flight Engineer. Selected as a Russian cosmonaut in 1985, Krikalev was born in Leningrad (renamed St. Petersburg), Russia, and he will be making his fourth space flight. He first flew as flight engineer on the second joint Soviet-French science mission aboard the Mir Space Station from November 1988 to April 1989. He next flew as flight engineer on the ninth Mir mission from May 1991 to March 1992. In February 1994, Krikalev became the first cosmonaut to fly on the Space Shuttle on mission STS-60, the first joint U.S.-Russian shuttle flight. He had logged more than 1 year and three months in space, including seven spacewalks, before his first ISS venture. He is now serving as commander of the Expedition 11 crew onboard the ISS. After this mission is completed he will have spent more time in space that any other human being.

Have astronauts/cosmonauts ever had sex in space?