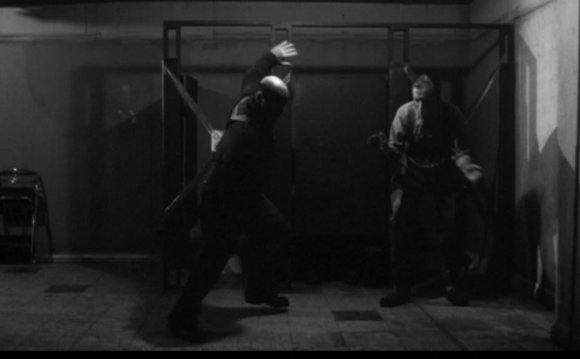 Here's a movie that very few will have ever heard of or get to see. It's definetely not for everyone, but I was entertained. It's strange how I like this film and not Eraserhead, but that's just how things are.

This is a sci-fi-western-musical surrounding the life of a space cowboy who encounters some other characters including his old nemesis who kills anyone just for being around.

This is very much a low-budget, independent feature. Despite being a film that takes place in outer space, the effects and props are handled Flash Gordon style.

The whole movie is done in a very surrealist fashion. It could be seen as a comedy, and there are funny moments involving the randomness and break outs into song. It could also be seen as slightly disturbing when dealing with the space cowboy's nemesis.

I also have to point out the soundtrack created by the lead singer of the band who wrote, directed, and stars in this movie, Cory McAbee. It's a good rock soundtrack.

Once again, this is not for everyone, but it also wont be seen by almost anyone, so if you like very random things that are strange or Lynch films, you might like this.