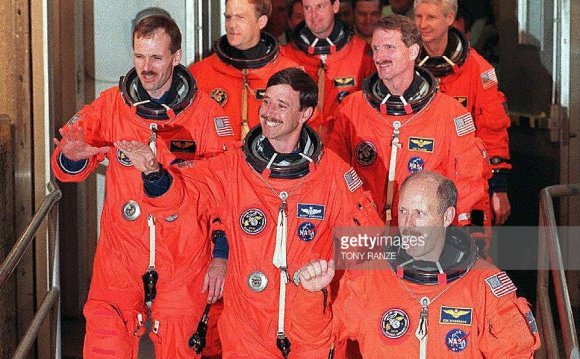 STS-103 was a Hubble Space Telescope servicing mission by Space Shuttle . The mission launched from Kennedy Space Center, Florida, on 19 December 1999 and returned on 27 December 1999.

The primary objective of STS-103 was the Hubble Servicing Mission 3A. STS-103 had four scheduled Extravehicular Activity (EVA) days where four crew members worked in pairs on alternating days to renew and refurbish the telescope.

NASA officials decided to move up part of the servicing mission that had been scheduled for June 2000 after three of the telescope's six gyroscopes failed. Three gyroscopes must be working to meet the telescope's very precise pointing requirements, and the telescope's flight rules dictated that NASA consider a "call-up" mission before a fourth gyroscope failed. Four new gyros were installed during the first servicing mission (STS-61) in December 1993 and all six gyros were working during the second servicing mission (STS-82) in February 1997. Since then, a gyro failed in 1997, another in 1998 and a third in 1999. The Hubble team believed they understood the cause of the failures, although they could not be certain until the gyros were returned from space. Having fewer than three working gyroscopes would have precluded science observations, although the telescope would have remained safely in orbit until a servicing crew arrived.

Hubble's gyros spin at a constant rate of 19, 200 rpm on gas bearings. This wheel is mounted in a sealed cylinder, which floats in a thick fluid. Electricity is carried to the motor by thin wires (approximately the size of a human hair). It is believed that oxygen in the pressurized air used during the assembly process caused the wires to corrode and break. The new gyros were assembled using nitrogen instead of oxygen. Each gyroscope is packaged in a Rate Sensor assembly. The Rate Sensors are packaged in pairs into an assembly called a Rate Sensor Unit (RSU). It is the RSUs that the STS-103's astronauts changed. The RSUs each weigh 11.0 kilograms (24.3 lb) and are 12.8 by 10.5 by 8.9 inches (325 by 267 by 226 mm) in size.

In addition to replacing all six gyroscopes on the December flight, the crew replaced a Fine Guidance Sensor (FGS) and the spacecraft's computer. The new computer reduced the burden of flight software maintenance and significantly lowered costs. The new computer was 20 times faster and had six times the memory of the DF-224 computer previously used on Hubble. It weighs 32.0 kilograms (70.5 lb) and is 18.8 by 18 by 13 inches (478 by 457 by 330 mm) in size. The FGS installed was a refurbished unit that was returned from Servicing Mission 2. It weighs 217 kilograms (478 lb) and is 5.5 by 4 by 2 feet (1.68 by 1.22 by 0.61 m) in size.

The repair mission also installed a new S-Band Single Access Transmitter (SSAT). Hubble has two identical SSATs onboard and can operate with only one. The SSATs send data from Hubble through NASA's Tracking Data Relay Satellite System (TDRSS) to the ground. The new transmitter replaced one that failed in 1998. The SSAT weighs 3.9 kilograms (8.6 lb) and is 14 by 8 by 2¾ inches (356 by 203 by 70 mm).

A spare solid state recorder was also installed to allow efficient handling of high-volume data. Prior to the second servicing mission, Hubble used three 1970s-style reel-to-reel tape recorders. During the second servicing mission, one of these mechanical recorders was replaced with a digital solid state recorder. During this mission a second mechanical recorder was replaced by a second Solid State Recorder. The new recorder could hold approximately 10 times as much data as the old unit (12 gigabytes instead of 1.2 gigabytes). The recorder weighs 11.3 kilograms (25 lb) and is 12 by 9 by 7 inches in size.