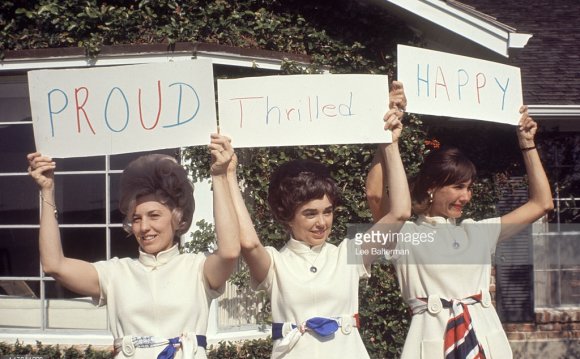 A television camera and several other pieces were taken from Surveyor 3 and brought back to Earth for scientific examination. Here, Apollo 12 moonwalker, Pete Conrad, examines the Surveyor’s TV camera before detaching the gear.

Apollo 12, the second manned lunar mission, took off for the moon on Nov. 14, 1969. The spacecraft's target was the Ocean of Storms, and NASA scientists hoped it would land a little closer to bull's-eye than the first mission got.

Apollo 11 was a great technological achievement, but it landed four miles from its target. NASA wanted a more pinpoint landing in future missions. Also, part of Apollo 12's work would be to retrieve bits of Surveyor 3, another spacecraft that had landed on the moon in 1967. If the crew landed miles away, there was no hope of achieving that.

The crew of Apollo 12 were seasoned astronauts and pilots, and were close friends.

Pete Conrad, a wise-cracking gap-toothed commander, graduated from Princeton University and joined the Navy, where he became a flight instructor. He first flew in space on Gemini 5, which set an endurance record at the time and pushed the United States ahead of the Soviet Union in terms of accumulated hours in space.

Lunar module pilot Alan Bean was a student of Conrad's at the U.S. Naval Test Pilot School; in interviews with journalist Andrew Chaikin, the story was told that Bean was Conrad's first pick for Apollo 12. However, Astronaut Office chief Deke Slayton voted the proposal down. C.C. Williams was chosen instead. Tragically, Williams died in a T-38 crash on Oct. 5, 1967. When Conrad approached Slayton again, Slayton agreed to bring Bean on board. Bean felt it was a rescue from his previous work at NASA, and an opportunity he would never forget.

The command module pilot for Apollo 12 was Richard "Dick" Gordon, who came to NASA after setting speed and distance records, and also doing flight testing for the Navy. His skill at the stick came in handy for the Gemini 11 mission, when he and Conrad piloted the docked spacecraft to 528 miles (850 kilometers) above Earth, an altitude record at the time.

Kicking up dust in the Ocean of Storms

To help the astronauts land as close as possible to their target, NASA had made some adjustments to the landing computer. In the lunar module Intrepid on Nov. 19, Conrad and Bean anxiously looked outside hoping what they saw on the surface corresponded with what they memorized on maps back on Earth. When Conrad spotted a familiar crater, he whooped, "There it is! Son of a gun, right down the middle of the road!"

Intrepid's descent caused a dust cloud outside as the astronauts glided into the Ocean of Storms. Conrad landed with just a little fuel to spare, and within shouting distance of Surveyor.

When it was time for him to head down the ladder to the surface a few hours later, Conrad joked about his height: "Whoopee! Man, that may have been a small one for Neil, but it's a long one for me."

'Don't come to the moon without a hammer'

Then, Conrad struggled in deploying a nuclear-powered experiment package; he couldn't free the plutonium cask from its case. When repeated attempts proved unsuccessful, Conrad reluctantly tried hitting it with a hammer. The fuel element sprung free, and Bean quipped, "Don't come to the moon without a hammer."

Bean and Conrad slept in hammocks overnight, and woke up the next morning to do some geology. The Ocean of Storms was a level plain. It was not so interesting geologically, but still a great practice point for future missions.

Their plan was to do a walk in a circle, stopping at various sites to take samples. The crew not only picked up rocks, but experimented with running techniques and met their goal of taking bits of Surveyor away with them. To the astronauts' surprise, Surveyor was coated with dust kicked up from Conrad's landing some 656 feet (200 meters) away.

Bean and Conrad lifted off the next day to meet their friend Gordon, orbiting above in Yankee Clipper, and head home. They splashed down in the Pacific Ocean on Nov. 24, about three miles from the target area. The flight lasted 244 hours, 36 minutes and 25 seconds — just 62 seconds longer than planned. The "Pinpoint Mission" had shown NASA that it could perform missions with precision. It was also ready to tackle more interesting geology in future missions.

'The Fantasy - Conrad, Gordon and Bean' by Alan Bean

It had been possible for only two astronauts to land on the moon in the Apollo program. There was little room in the lunar module for a third body. Besides which, somebody needed to stay in lunar orbit to dock with the returning lunar spacecraft when it was ready to come home.

The Apollo 12 crew, who were close friends, found this fact the toughest. Dick Gordon never got a moonwalk. Years later, Alan Bean — in a new career as an artist — did a painting portraying Gordon, Bean and Conrad on the surface of the Ocean of Storms. Bean titled it "The Fantasy, " one of a series of paintings showing "buddies forever" on the moon.