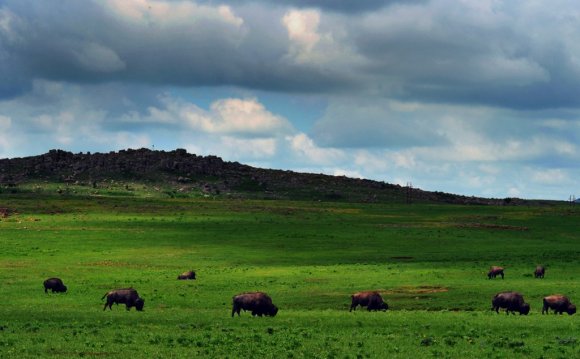 Do you dream of being an astronaut someday? There are boys and girls raised in Oklahoma, maybe from your hometown, who became astronauts! Many more Oklahomans contributed to the United States space programs such as scientists, engineers, politicians, and more. In fact, Oklahomans have been involved in every phase of the United States’ space program. The pioneer spirit that started with the land runs continues as these Oklahomans explore the frontier of space.

Have you ever looked up at the night sky? When you do you are looking into outer space, which has stars, planets, and comets. We live on the planet Earth. Earth is part of our solar system. A solar system has planets that circle the sun. Do you know the planets in our solar system? They are Mercury, Venus, Earth, Mars, Jupiter, Saturn, Uranus, and Neptune. Scientists once considered Pluto a planet but in 2006 they decided Pluto is too small to be a planet. Instead, it is now considered a dwarf planet. Scientists study space in different ways. For example, we can look into telescopes to look at space from earth, astronauts travel to space in rockets, and scientists send robots to take measurements and samples.

This site allows you to meet astronauts from Oklahoma and other Oklahomans that helped the space program. First, read the “Background” page for more information you should know before learning about the astronauts. Second, click on the pictures of Oklahoman astronauts to learn more about them. The “Other Oklahomans” page briefly describes some Oklahomans who also helped the space program. The “Programs” page tells you about space programs and how Oklahomans have helped. You can also use the “Vocabulary” page for a list of vocabulary words. Be sure to use this list if you come across a word on the rest of the site that you do not know. You can then click on the “Further Reading” section to find online resources, children’s books, and other books about space. Last, the “Activities” page has coloring sheets and other activities that can be done individually or as part of a group!

A Freeze-Dried, Irradiated And Thermostabilized ...