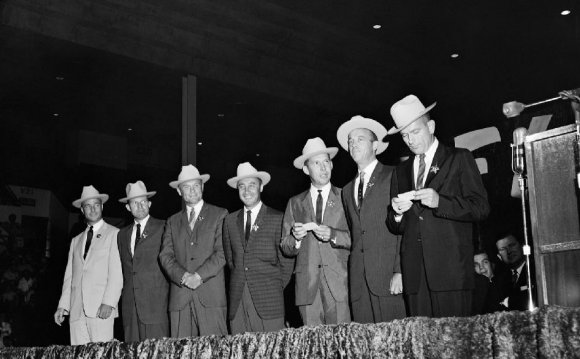 On July 20, 1969, the Apollo 11 mission put the first humans on the moon. Neil Armstrong famously commemorated his first steps on the moon by saying, "That's one small step for man, one giant leap for mankind."

Edwin "Buzz" Aldrin, Armstrong's fellow astronaut on Apollo 11, salutes the U.S. flag on the lunar surface. Aldrin followed Armstrong and became the second man to walk on the moon on July 21, 1969.

This is the first photograph of Earth's south polar ice cap. It was taken by the crew of Apollo 17 as the astronauts traveled to the moon in December 1972.

The Soviet Union launched the Space Age and the space race with the successful launch of Sputnik I, the world's first satellite, on October 4, 1957. It orbited the Earth every 98 minutes.

Laika the dog is pictured aboard Sputnik II on November 13, 1957. She was the first animal to orbit the Earth. She did not survive her trip, but the mission provided valuable data that paved the way for the first human in space.

Soviet pilot and cosmonaut Yuri Gagarin made history as the first human to fly into space. On April 12, 1961, Gagarin took off in the Vostok 1, orbited the Earth and parachuted back to firm ground.

Less than a month after Gagarin's trip, astronaut Alan Shepard became the first American to travel into space. On May 5, 1961, Shepard piloted Freedom 7, the first manned Mercury program mission, in a suborbital flight that lasted a little more than 15 minutes.

John Glenn, aboard the Friendship 7, became the first American to orbit the planet on February 20, 1962. He also set a record as the oldest astronaut in space when, at the age of 77, he went on a mission aboard the Space Shuttle Discovery in November 1996.

Valentina Tereshkova, seen here with Gagarin, piloted the Vostok 6 on June 16, 1963, becoming the first woman to fly into space.

Soviet cosmonaut Vladimir Komarov died during his second flight when the Soyuz 1 spacecraft crashed during its return to Earth on April 23, 1967. He was the first human to die during a space mission.

On July 15, 1975, Cold War adversaries temporarily broke the thaw when the United States and the Soviet Union embarked on their first joint space mission. Russia's Soyuz craft launched seven hours before the U.S. Apollo craft, and the two vehicles linked up 52 hours after Soyuz lifted off. Here, the two crews pose for a portrait.

At left is Alexei Leonov, commander of the Soviet crew of Soyuz 19, shaking hands with Thomas Stafford, commander of the American crew of Apollo 18, on July 17, 1975. This would be the last Apollo mission conducted by NASA.

Gen. Arnaldo Tamayo Mendez, center, looks at a homemade rocket in Havana, Cuba, in 2009. Mendez became the first Latin American, the first person of African descent and the first Cuban to fly in space when he flew aboard the Soviet Soyuz 38 on September 18, 1980.

Taking off on April 12, 1981, Columbia made the first orbital flight of NASA's space shuttle program. Here, crew members John Watts Young, left, and Robert Laurel Crippen hold a model of the orbiter in 1979.

The Mercury 7 Astronauts and Celestis