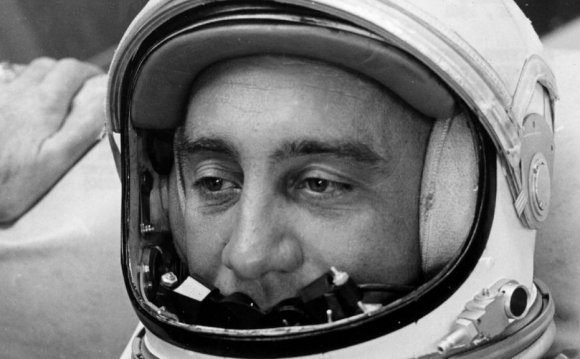 Gus Grissom was the second American in space and the first NASA astronaut to fly twice in space.

Virgil "Gus" Grissom was a NASA astronaut who flew twice in space and was selected to command the first Apollo manned mission as well. He died, however, when a fire erupted in his spacecraft in 1967 on the launch pad, which killed his two crewmates as well. The incident prompted many changes in the Apollo program.

Grissom began his flying career in the Air Force and received his wings in 1951. A veteran of the Korean War, he piloted 100 combat missions before becoming a flight instructor in 1952, according to NASA. Later in his flying career, he studied aeronautical engineering at the Air Force Institute of Technology and attended test pilot school at Edwards Air Force Base in California.

As one of the first seven Mercury astronauts ever selected by NASA in April 1959, Grissom rocketed to international fame before stepping inside of a spacecraft. The job of Grissom and his fellow astronauts was to prove that humans could work safely and accurately during spaceflight.

"I would lie in bed once in a while at night and think of the capsule and the booster and ask myself, 'Now what in hell do you want to get up on that thing for?' ... But I knew the answer: We all like to be respected in our fields, " Grissom said in a 1962 interview.

Grissom's first flight assignment was piloting Liberty Bell 7, which flew a 15-minute, 37-second suborbital hop on July 21, 1961. It was the second manned flight of the single-astronaut Mercury spacecraft, and used explosive bolts on the door so that the astronaut could leave the spacecraft quickly after landing.

The flight proceeded without incident, but when Grissom landed, something prematurely triggered the hatch and caused the door to blow open. Grissom ended up in the water with a sinking spacecraft beside him. The recovery helicopter tried in vain to retrieve Liberty Bell 7 for a few minutes before picking up an exhausted Grissom. (The spacecraft was later retrieved in 1999 and is now on display at the Kansas Cosmosphere and Space Center.)

While the incident was later lampooned in the book and movie versions of "The Right Stuff, " internally NASA management gave Grissom more flight assignments. Grissom, in fact, jumped into Gemini early in his NASA career because he realized there would be few opportunities for him to fly again in Mercury, since all seven astronauts selected were supposed to get flights first.

"He looked at it and said, 'My God, we are not going to have that many flights! I'm going to go up to St. Louis and play with Gemini', " fellow Mercury astronaut Wally Schirra told Air and Space Smithsonian in 1998. "So it was essentially his spacecraft. He practically had it to himself."

The spacecraft designers initially tailored the Gemini spacecraft around the short Grissom (who reports say was 5 feet 6 inches), leading some to call it the "Gusmobile". (Design changes were made when officials discovered most astronauts could not fit inside.) Grissom also co-flew the inaugural Gemini 3 flight of the program with John Young. In a joke concerning Liberty Bell 7, they named the spacecraft after the protagonist of the 1960s Broadway musical "The Unsinkable Molly Brown."