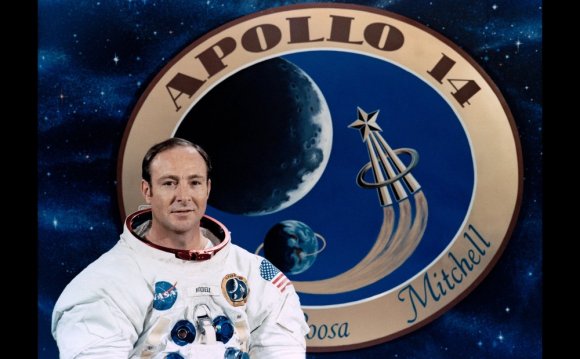 I mourn with so many others, the passing of my old friend, astronaut Edgar Mitchell, the sixth man on the moon. He lived valiantly and deeply in both inner and outer worlds. Many years ago he came to our home, then in Pomona, New York to have my husband and I help him remember what he saw on the moon. The moon walks had so many jobs and requirements that it was thought that important information and perceptions might be missing. We induced a deep trance and had him repeat his experience. He said that this had helped his recall, as in re-living the experience in an altered state, he picked up more subtle details that he had missed. But then he added, that what was also of great importance is what he saw in the flight back to Earth. Looking out of the port hole he saw the living Earth herself, so beautiful, it's greens and blues and silver, floating in the womb of the cosmos. There were no separate nations to be discerned, no war, no hatred, no divisions of any kind-just one incredibly beautiful world of which humanity was a part. It was at this point that he began hls lifelong commitment to exploring the inner space of humans so that we could grow up and become worthy of our Earth home. It was then too, tthere in our living room, that we explored the possibility of creating a center where the inner space of our minds and hearts, the great range of human capacities and capacities of consciousness could be explored. This conversation and others with like minded people resulted in the creation of IONS-the Institute of Noetic Scienc where the frontiers of human consciousness are discerned and developed.

Before leaving our home, Mitchell announced, "You know, Jean, I went up to the moon as an astronaut. I have returned as a psychenaut."

Dear Ed, wherever you are traveling now, I hope you are reveling in other spaces, infinite dimensions.

We love you. We'll miss you.

Dear Ones: We are all so deeply touched by the life of Edgar Mitchell. In so many ways he opened up the path for the conscious evolution of humanity, in all that he did.

The lunar landing, the view from space which opened his heart and consciousness, founding IONS, sighting and verifying his experience of extraterretstials publically, research the deepest mysteries of science and consciousness, being ever loving and gracious.

He has been a friend to me from the beginning of my public life.

I remember when I first meet him, after he returned from the Moon and I hadfounded The Foundation for Conscious Evolution.

He said to me in sharing his new experience with IONS. "Barbara, it’s just a matter of putting one foot in front of the next. You do not see where the foot will land, but you just put it down and the landing comes up!

Love to all, Barbara

I was privileged to be on the early IONS board for 17 years and got to know the intellect and caring of this wonderful Founder personally. His dedication to healing and preserving our beautiful planet was obvious and passionate, along with his many other talents and inspiration.

Edgar was a dear friend, a true colleague, a great visionary and a person of the highest integrity. He understood that love is the greatest force in the universe. I am quite sure he has in no way ceased his explorations. He is in a place of the deepest awe. I love you Edgar. Your spirit shines bright. love and peace,

Edgar Mitchell was a true evolutionary hero. The day after his partner on the moon, Alan Shepard, died in 1998 he asked me to spend time with him on his farm in Florida. He was very sad about Alan's death and the ending of what he saw as an era of brave exploration into the frontier of space. He showed me the camera he used on the moon, the watch, and other instruments. We were both amused by how large and cumbersome everything was, pre-digital. I recall him joking about how future space explorers would probably be "cyber humans."

Edgar's presence was an amazing bridge between the eagle and the condor, science and art, the rational and intuitive. His spirit will live on to help us all explore the vastness of the Consciousness Revolution that we are experiencing and our own evolutionary leadership roles.

Sending love to Edgar and to all of us who are left with a more conscious world because of the bridges he built.